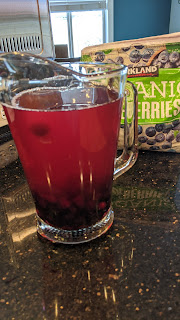 This blueberry water makes a nice, refreshing alternative when I feel bored with plain water. Granted fruit infused water doesn't allow for the fiber and other nutrients to be fully utilized by the body in the way eating whole fruit does; however, I'm okay with that because I know I'm getting all those nutrients in the other food I'm eating. And it's so easy to make! Blueberry Water   1 cup blueberries, frozen or fresh 60 ounces water*   Place the blueberries in a large pitcher and cover with water.   Let steep overnight in the refrigerator.   Refill the pitcher a few times to get the most out of the berries.   Note: Berries can then be used in a smoothie, if desired. * I use the same amount of blueberries whether I'm using a 48-ounce or 60-ounce pitcher. You just can't get as many infusions - refills of water - from the 60-ounce as the 48-ounce, generally speaking. Adjust amount of water according to the size of your pitcher.
Post a Comment
Read more

Thoughts on The How Not To Diet Cookbook 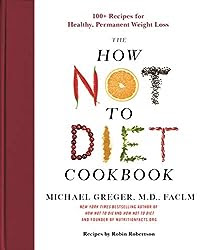 After reading How Not To Diet by Dr. Michael Gregor, I anxiously awaited the release of the The How Not To Diet Cookbook by Dr. Gregor and Robin Robertson. I'd found How Not To Diet interesting, and I liked several of the ideas in the book. He promoted healthy eating more than weight loss and talked about how a healthy lifestyle leads to a stable and healthy weight in most cases. I like the concept of focusing on health instead of weight.  At least one or two of my friends were skeptical when I told them I was reading the book. The same basic question arose. "Why? You are a healthy weight." and to be clear, I am a healthy weight. I was more interested in the research surrounding health than in weight loss. I found many of his tips just made good sense. Since they couldn't result in losing too much weight and had other health benefits, I decided to incorporate some of them into my lifestyle. Regular read
Post a Comment
Read more 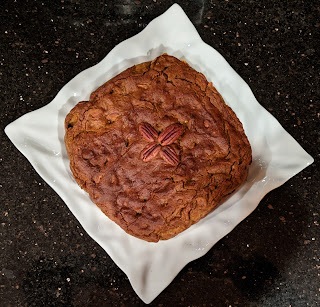 Confession: I used to hate pumpkin cake, but I've come to realize it wasn't so much the cake as the cream cheese frosting that topped it.  So when I first started thinking about making a pumpkin cake, I wasn't sure why. I kept thinking back to the few times I ate it when I was younger and cringing, but I decided to move forward anyway. I came up with this recipe for a vegan pumpkin cake. I really like it. It's not super sweet. The spices don't overwhelm the pumpkin. The texture might be a bit denser than many are used to, but I prefer the slightly denser texture. It's particularly good paired with a cup of coffee or a cup of black tea. Pumpkin Cake ½ cup maple syrup* 1 avocado 1 teaspoon vanilla extract 1 can pumpkin puree 1 ½ cups spelt flour 1 teaspoon baking powder 1 teaspoon baking soda 2 teaspoons ground cinnamon 1 teaspoon ground ginger ¼ teaspoon ground cardamom 1/8 teaspoon ground cloves ¼ teaspoon ground nutmeg 1 cup chopped pecans Preheat oven to 350 d
Post a Comment
Read more

Is Making Vegan Cheese Worth the Effort?

December 31, 2020
I started 2020 with a desire to figure out how to make vegan cheese that was at least a reasonable facsimile of cheese.  Over the past few years, I have bought some commercial vegan cheeses, but I found them too fatty and/or oily for my taste. I wanted to find a viable option but didn't. I tried to figure out how I could use some of them to inspire recipes to make my own. I have tried to make a wide variety of vegan cheese recipes I found on the internet since becoming vegan but usually find them lacking in some way or the other. I've also discovered that often when I find one that works well once, replicating the success doesn't go as well. I have come to believe this might be more because of the novelty of the first attempt more so than an actual successful first attempt. Expectations might be part of the problem. By that I mean I want the flavor without the fat or the salt. And that becomes a tall order. Yet, I like the idea of vegan cheese for pizza, lasagna, and a few
Post a Comment
Read more 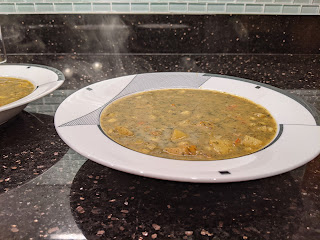 Growing up, we used to eat potato soup quite regularly. It was okay, but not really one of my favorite meals. When I grew up I found a recipe I rather liked, but stopped making it years ago. Recently, I was surprised when I felt a craving for potato soup. I started thinking about ways to make a vegan potato soup that I'd like. I thought about the potato soup I ate during my childhood and the one I used to make before I started eating a plant-based diet. Then I did a little research and ended up developing two recipes for potato corn soup that I like quite well. Dilly Potato Corn Soup is one of those. Dilly Potato Corn Soup 1 small onion 1 bell pepper 2 cloves garlic ½ inch piece fresh ginger 1 tablespoon ground flaxseed 1 tablespoon no-salt seasoning blend 1 teaspoon ground cumin 4-8 small potatoes 1 cup corn 4 cups vegetable stock ½ cup nutritional yeast 1 teaspoon turmeric 2 tablespoons dill weed 1 lime Dice onion and bell pepper. Grate garlic and ginger. Chop potato into small
Post a Comment
Read more 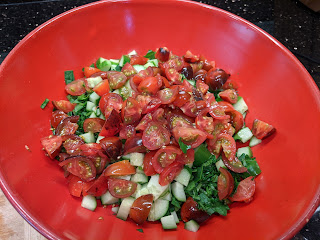 This is one of the most basic salads you can make. It's easy. The ingredients are readily available in most grocery stores. It's nutritious. I'm not a fan of lettuce as I've said many times before, but this combination of greens is one of my favorites. You can add to this or remove something. It makes a nice foundation for building other salads. It also works with a variety of salad dressings . Basic Three Green Salad 4 leaves chard 4 leaves kale 1 cup spinach 1 cucumber  1 large tomato Chop chard, kale, and spinach into small pieces. Place in bowl . Chop cucumber into small pieces. Add to bowl. Chop tomato into small pieces. Add to bowl. Mix together. Add desired dressing. Note: I use organic ingredients whenever possible.
Post a Comment
Read more 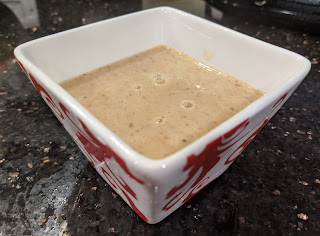 T. L. Cooper
T. L. Cooper is an author and poet whose work aims to empower and inspire through an exploration of the human condition. Her poems, short stories, articles, and essays have appeared online, in books, and in magazines. Her published books include a collection of short stories, Soaring Betrayal, her Silhouette Poetry Series, and a novel, All She Ever Wanted. She grew up on a farm in Tollesboro, Kentucky. She currently lives in Albany, Oregon with her husband and three cats.

​Disclosure: This blog contains affiliate links meaning if you click on those links and make a purchase, I earn a commission at no additional cost to you.